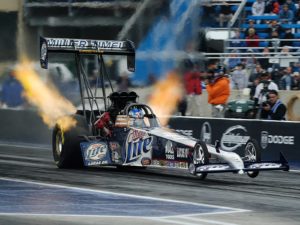 The Definition of “ACCELERATION”

Read this thru and try to comprehend the amount of force produced in just under 4 seconds! The last paragraph puts it all into perspective!

There are no rockets or airplanes built by any government in the world that can accelerate from a standing start as fast as a Top Fuel Dragster or Funny Car….. and that includes any aircraft launched by a catapult front an aircraft carrier.  Nothing can compare…..

It takes just 15/100ths (0.15) of a second for all 6,000+ horsepower (some believe 8,000 HP is more realistic – there are no dynamometers capable of measuring) of an NHRA top Fuel dragster engine to reach the rear wheels.

Under full throttle, a dragster engine consumes 1-1/2 gallons of nitromethane per second: a fully loaded 747 consumes jet fuel at the same rate with 25% less energy being produced.

With 3,000 CFM of air being rammed into the cylinders by the supercharger on overdrive, the fuel mixture is compressed into a near-solid form before ignition.

Cylinders run on the verge of hydraulic lock at full throttle.

At the stoichiometric (stoichiometry: methodology and technology by which quantities of reactants and products in chemical reactions are determined) 1.7:1 air/fuel mixture of nitromethane, the flame front temperature measures 7,050 degrees F. (Oxy-acetylene on “cut” is 6,300)

Dual magnetos supply 44 amps to each spark plug. This is the output of an arc welder in each cylinder.

Spark plug electrodes are totally consumed during one pass. After halfway, the engine is dieseling from compression, plus the glow of exhaust valves at 1,400 degrees F.  The engine can only be shut down by cutting the fuel flow.

If spark momentarily fails early in the run, unburned nitro builds up in the affected cylinders and then explodes with sufficient force to blow cylinder heads off the block in pieces or split the block in half.

In order to exceed 300 mph in 4.5 seconds, dragsters must accelerate an average of over 4G’s.  In order to reach 200 mph well before half-track, the launch acceleration approaches 8G’s.

Dragsters reach over 300 miles per hour before you have completed reading this sentence.

The redline is actually quite high at 9,500 rpm.

Assuming all the equipment is paid off, the crew worked for free and for once NOTHING BLOWS UP, each run costs an estimate $1,000.00 per second.

Putting all of this into perspective:

You are driving the average $140,000 Lingenfelter ‘twin-turbo’ powered Corvette Z06.  Over a mile up the road, a top fuel dragster is staged and ready to launch down a quarter mile strip as you pass. You have the advantage of a flying start.  You run the ‘Vette hard up through the gears and blast across the starting line and pass the dragster at an honest 200 mph.  The ‘tree’ goes green for both of you at that instant.

The dragster launches and starts after you.  You keep your foot down hard, but you hear an incredibly brutal whine that sears your eardrums and within 3 seconds, the dragster catches and passes you.  He beats you to the finish line, a quarter mile away from where you just passed him.

Think about it, from a standing start, the dragster had spotted you 200 mph and not only caught, but nearly blasted you off the road when he passed you within a mere 1,320 foot long race course.

The dragster outruns the Lingenfelter Corvette by a car length in the quarter mile even though the dragster gave the Corvette a 200 MPH starting advantage.